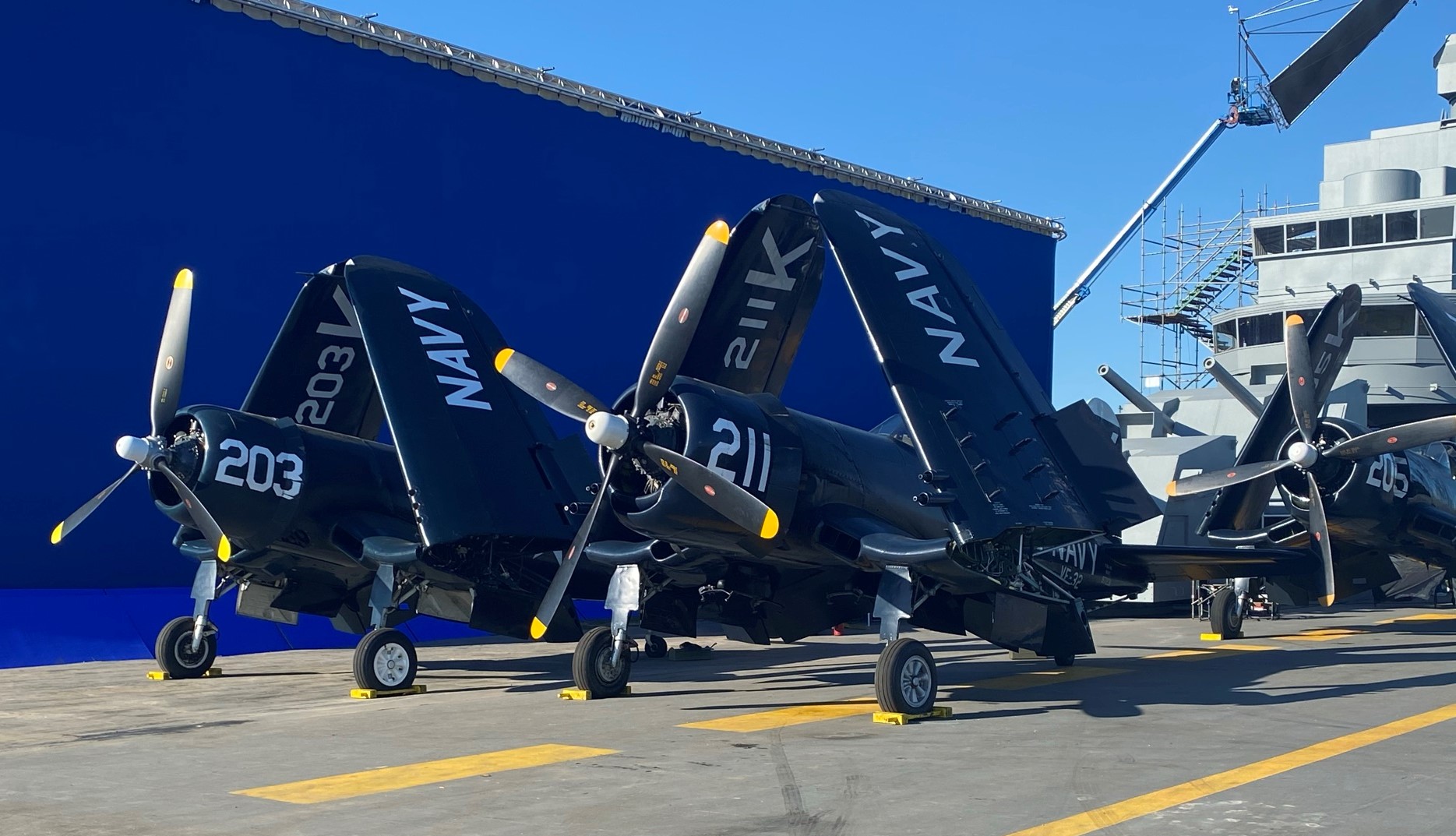 The vintage WWII fighter aircraft was used for action scenes during the filming of the new Korean war movie, along with several other Corsairs. It was restored by the CAF and is operated by Airbase Georgia at its Warbird Museum, 1200 Echo Ct., Peachtree City, adjacent to the Atlanta Regional Airport – Falcon Field. Columbia Pictures painted a different number, 203, on the plane for the movie although the Corsair was returned to its original number and livery after the filming. “Devotion” is based on a true story from the Korean conflict. Author Adam Makos chronicled the story about the comradeship of two pilots, Jesse Brown and Tom Hudner, in his book, “Devotion: An Epic Story of Heroism, Friendship and Sacrifice”. Brown was the first Black pilot in the U.S. Navy.

Corsair Crew Chief Gregg Scott, who has more than 20 years of experience with Delta Air Lines as an avionics technician, spent about six weeks in South Georgia for the filming. He supervised movement of the plane on the ground for various shots, in addition to maintaining the Corsair for flight. Airbase Georgia pilot Stan Musick handled the flying and also did significant orientation flying in a T-6 to prepare Jonathan Majors for his role as Brown. Glen Powell plays Hudner. Musick also served as a technical advisor for some of the cockpit scenes. He is a lifelong pilot who served as flight surgeon in the Air National Guard and flies many CAF aircraft, including the Corsair, P-51 Mustang and LT-6 Mosquito trainer. He has 30 years in the CAF and serves as instructor and check pilot for several aircraft.

Scott said the days of preparation and filming were long, but he enjoyed watching the aircraft in operation on a fabricated aircraft carrier built at the Statesboro Bullock County Airport. He said it was a unique experience being part of a movie production. “I had the opportunity to meet Thomas Hudner’s son, see his logbooks and hold Hudner’s Medal of Honor,” Scott said. “He signed the airplane that was depicting his dad’s Corsair in the movie.” Scott also had the honor of meeting Jesse Brown’s granddaughter and great granddaughter.

After extensive service with the U.S. Navy and Marines in WWII, Corsairs were used effectively in Korea along with the more advanced U.S. jet aircraft of the 1950s, serving primarily as low-level fighter-bombers. Airbase Georgia’s Corsair is on display from 9 a.m. to 4 p.m. Tuesdays, Thursdays and Saturdays at the Warbird Museum.